ART ON SAX A colourful urban exhibition!
SAX & THE CITY > ART ON SAX

In the context of "l'Europ'A. Sax", which took place in Dinant in November 2010 as a tribute to Adolphe Sax, the International Adolphe Sax Association (IASA) and the Maison du Tourisme de la Haute-Meuse (MdT) wished to create in the city a reminder of Mr Sax and his brilliant invention. 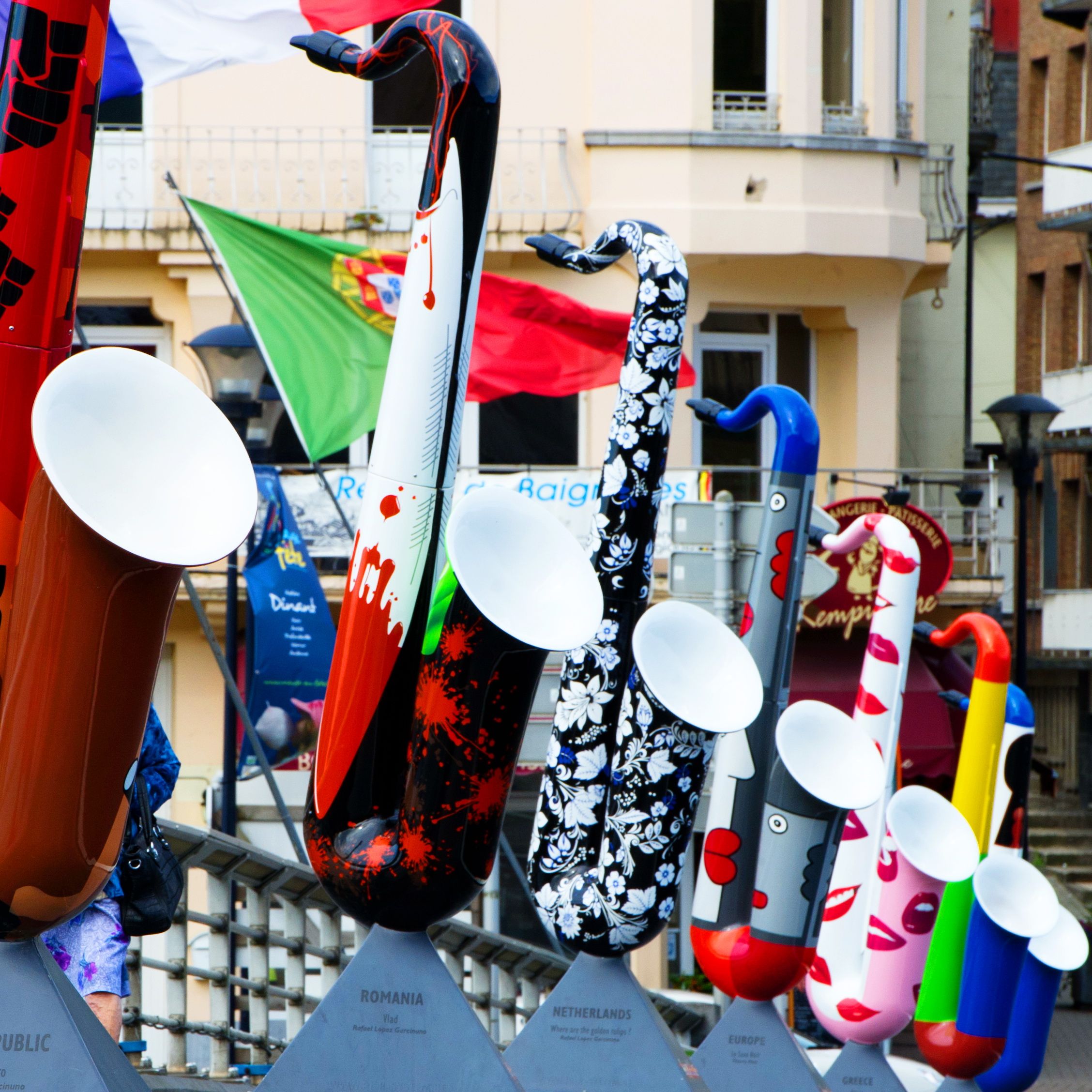 With the assistance of the EU-funded Walloon Rural Development Programme and with the support of the Walloon Region's Commissariat Général au Tourisme, the IASA and the MdT had 28 giant saxophones – more than three metres high – made to reflect the countries of the European Union.

For their decoration, a major international Internet-based graphic design competition was held.

The brief was to create original, creative designs, free of clichés, on the theme of European countries and Europe itself.

The result was 28 original artistic works in which music meets graphic art.

We invite you to explore this exhibition with a difference on a journey through the European imagination, from the Maison du Tourisme (Tourist Information Centre) to the Maison de Monsieur Sax (Mr Sax's house), crossing the bridge on the way.

Why not complete your tour of the city by exploring it on a fun walk that will take you from the Anamorphoses Trail (Parcours des Anamorphoses) to the European saxophones via the Maison de la Pataphonie?

ADOLPHE SAX
Génie inventif
(House of Mister Sax)
Evocation of the genius of Adolphe Sax and some of his inventions. Under the bell is the official seal of Adolphe Sax as it appears on his patents.

AUSTRIA
Kristallwelten
(Charles de Gaulle Bridge)
It is an evocation of the "Swarovski Crystal Worlds", a veritable universe dedicated to crystal in all its facets. A huge green face guards the entrance to this magical world. From his mouth, a waterfall gushes forth. The swirls thus created generate bubbles, a nod to the Austrian firm "Red Bull".

BELGIUM
Compromis
(Charles de Gaulle Bridge)
A superimposition of inverted saxophones invades the bottom of the instrument. The colours used are those of the Belgian flag, with the Walloon rooster and the Flemish lion. At the bottom, the onomatopoeia "blabla" evokes the incessant talks and compromises as the Belgian way. At the centre of everything, the Brussels logo is superimposed.

BELGIUM (Comics)
BeDelirium
(On loan)
Belgium, country of the comic strip. Some world-famous authors: Hergé, Peyo, Morris, Franquin... Do you recognize all the Belgian monuments and cities reffered?

CHINA
The Red Dragon
(Charles de Gaulle Bridge)
The yellow stars on a red background evoke the national flag. At the bottom of the saxophone, the Great Wall and a panda are painted.

CROATIA
Šahovnica
(Charles de Gaulle Bridge)
The red and white checkerboard is reminiscent of the country's flag. The superimposition of a blue tie refers to the Croatian mercenaries (used by Louis XIII and Louis XIV) who wore a scarf around their necks, which also gave the word "cravate" in French.

CZECH REPUBLIC
Prazske Jaro
(Saint-Nicolas Square)
This is an evocation of the Prague Spring (1968) repressed by the USSR, which sent tanks into the Czech capital. Two of them are visible in black and white on the saxophone.

DINANT
Dinant, Fille de Meuse
(City Hall - Entrance)
Evocation of the city buildings with, notably recognizable, the bulbous bell tower of the Collegiate Church. The dominant colours are a mixture between the "blue" of the Meuse and the green of the green setting in which Dinant is situated.

ESTONIA
Russian Keyhole
(On loan)
Always considered the western gateway to the Russian Empire, Estonia can be compared to a keyhole. The three colours chosen are reminiscent of the national flag.

EUROPE
Le saxo noir
(Citadel)
Thierry Noir, famous for being the first artist to graffiti the Berlin Wall in 1984, was immediately approached to paint the European saxophone. One will easily recognize his deliberately minimalist technique and his brushstrokes with bright colours. Its “cartoon style” is reflected in the colourful faces with big purple lips.

FINLAND
Aqua = Vita
(Dinant Station)
Salmiakki Koskenkorva is a popular Finnish alcoholic drink, a blend of vodka and a composition based on glucose syrup and liquorice extract that gives this saxophone its black colour. Aquavit takes its name from the Latin "aqua vitae" which means "eau-de vie" (“brandy”) in French.

FRANCE
Sexy France, La Lala lala lala,
(Charles de Gaulle Bridge)
It is a leg dressed with a fishnet stocking and a suspender belt evoking the French-Cancan. The bottom of the saxophone represents the thigh and the mouthpiece symbolizes the foot.

GERMANY
Schlagermeister
(Charles de Gaulle Bridge)
"Football is a simple sport: twenty-two men chase a ball for 90 minutes and at the end, the Germans always win", said English footballer Gary Lineker, who noted that competitions were often won by the Mannschaft, the German national team.

GREECE
Dêmos
(On loan)
Countries where democracy and freedom of speech were born. Hence the different mouths that speak out.

HUNGARY
Rubik
(On loan)
The coloured squares are reminiscent of the famous Rubik's Cube from the 80s, invented by the Hungarian Ernö Rubik.

IRELAND
Good Luck, Irland
(Cultural Centre)
Saint Patrick, evangelizer of Ireland in the 5th century, is said to have explained the mystery of the Holy Trinity with the help of a clover. Since then, the shamrock has been the symbol of this country. If you look closely at the saxophone, you may be lucky enough to find one to four leaves.

LATVIA
Like a Bird
(On loan)
An allusion to the country's national bird, the nodding wagtail represented on the saxophone pavilion. The colours are not those of the flag but of the coat of arms of Latvia.

LITHUANIA
Dunk
(Charles de Gaulle Bridge)
This is a basketball reinterpreted in the form of a saxophone. Basketball is the national sport in Lithuania, the best European nation in this sport and a medal winner at every last Olympic Games. The word "dunk" on the saxophone refers to a two-handed basketball smash.

LUXEMBOURG
Deluxe
(Casino of Dinant)
Small country, but very prosperous. It is likened here to a horn of plenty from which euros flow.

MALTA
Melitta
(Tourist Office)
In ancient times, the island was famous for its honey ("Meli" in Greek and "Melitta" bee) which was exported throughout the Mediterranean basin. Some people claim that the honey also reminds one of the ochre colour of the island's cliffs...

NETHERLANDS
Where are the golden tulips?
(Patenier Square)
During the 16th century, the tulip, which originated in the East, was introduced to the Netherlands and immediately met with a flourishing success, with production never ceasing to grow. The black colour of the saxophone refers to the Dutch ambition to create a black tulip.

POLAND
Wycinanki
(Charles de Gaulle Bridge)
Representation of Polish wycinanki, a decorative craft made from monochrome and multicoloured paper cut-outs. Typical symbols of the country are inserted: the Warsaw Mermaid, Chopin, storks, bears, vodka, a lajkonik, pierogi, the Polish armoury, bison, icons and Orthodox churches. In the upper part, the blue refers to the Baltic Sea and the Masurian lakes. At the bottom are the Tatras, the famous Polish mountains and decorative forms of Art Nouveau style.

PORTUGAL
Tordesillas
(Charles de Gaulle Bridge)
Old world map showing the vertical demarcation established by the Treaty of Tordesillas (7 June 1494) which defined the membership of the colonies. On the west of this line: the Spanish territories. To the East, the Portuguese properties (Brazil, Azores, Cape Verde).

ROMANIA
Vlad
(Patenier Square)
It is an allusion to Count Dracula, a bloodthirsty vampire whose novel was inspired by Vlad III the Impaler, Prince of Wallachia, southern province of Romania.

The renowned multi-award-winning manufacturer of instruments, Henri Selmer (1858–1941), based in Paris, originally sold mouthpieces, reeds, and clarinets. In 1922, he designed his first saxophone and in 1929 he took over the workshops run by Adolphe-Edouard, Adolphe Sax’s son. Henri Selmer thus became the worthy successor of the inventor of the saxophone. This new giant saxophone is inspired by the "Supreme" saxophone, the new generation of saxophones from the SELMER company. + info

SLOVAKIA
Juraj Jánošík
(Saint-Nicolas Square)
It is an evocation of a popular hero of the country: Juraj Jánošík, a kind of Robin Hood who lived at the end of the 17th and beginning of the 18th century. At the bottom of the saxophone is a map of the country, the Slovak flag and the name of the country.

SLOVENIA
Ljubljana
(Patenier Square)
The saxophone represents the coat of arms of the city of Ljubljana with its castle and a dragon, the symbol of the city. It comes from the Greek legend of Jason and the Argonauts who fought a monster in a swamp near Ljubljana.

SPAIN
Mira
(In repair)
It is an evocation of the Spanish painter and sculptor Joan Miró, freely inspired by his painting "Personajes en la noche guiados por los rastros fosforescentes de los caracoles". The title of the saxophone is a play on words between the invitation to look at the work (mira) and the painter (Miró).

SWEDEN
I [D] EA
(Cultural Centre)
The saxophone is divided into pieces to be furnished in reference to the famous chain of furniture stores in kits. Yellow and blue are the colours of the national flag.
Note the little red Dalarna horse at the top, an important symbol of this region and of Sweden in general. It is customary to give them as gifts, hence the gift ribbon.

UNITED KINGDOM
Free
(Charles de Gaulle Bridge)
The yellow and pink colours are reminiscent of the punk movement initiated in the UK. We find Big Ben, a typical bus, telephone booths, an English bulldog wearing the Queen's hat, the Beatles' pedestrian crossing, John Lennon's glasses, the Bobbies protecting the crown... At the bottom are represented the thistle emblem for Scotland, the leek for Wales and the Tudor rose for England.

UNITED STATES OF AMERICA
Sax of Liberty
(Charles de Gaulle Bridge)
On one side, many references to Louisiana (flag, carnival, coat of arms, cathedral, stadium, Dixieland jazz) as the saxophone is paired with the one offered in New Orleans in 2018. On the other hand, commemoration of the Battle of the Bulge in December 44 in the region of Dinant. On the neck, the American flag "Star and Stripes" consisting of 13 stripes (the original 13 states) and 50 stars (the current states).

WALLONIA
La Joie de Vivre
(House of Pataphony)
Wallonia, the southern part of Belgium, mostly French-speaking, is known for its sense of celebration and joie de vivre. Evocation of a nocturnal festivity ablaze with fireworks.